Art-Rated: What drove you to put this show of Generation Y painters from Taiwan together?

Nunu Hung: I felt that upon seeing the paintings of the previous generation, especially in the Forties and Fifties in Asia, always had a social or political agenda. The paintings are all about images and conveying Socialism. I found that the painters in Taiwan liked to work with everyday objects; this was different from the previous generation. All these painters belong to the same generation and have been working since the media censorship laws have been lifted by the Taiwanese government. Now the work is totally explorative with a lot of elements, and nothing looks big or heroic like Social Realism.

AR: As painters what makes our generation different? Since the censorship laws have been lifted is everything open now? Are there still any restrictions?

NH: The painters of this generation, who trained in the Eighties or Nineties, without democracy and freedom had a target to react to. We all had the same target of getting freedom from the government. This was in their brains and it got into their work. In mainland China they still have this target, but in Taiwan it has become very liberal and many have criticized the work of this generation of Taiwanese artists, asking “What do you care about?” “You only care about your feelings, or you care about a piece of cake, or video games or a TV show.” Some people criticize this, but Taiwan is very liberal and it is how they grew up, they just want to do what they want.

AR: In a culture and a time when we are saturated by a media-driven popular culture where does an artist find meaning? Is that meaning taken from their culture? Or are they reaching back farther into their history, into stories or folklore? What inspires their work?

NH:  Before the internet access to imagery was so limited, and there was no way to access that. And there was only one angle or viewpoint to look at things from. These earlier artists wanted to make work with ideas that were large and more universal, but they were actually shallower. This [current] generation, with the opportunity to see many different things pushed their subject matter to more personal things.

NH:  Yes. And with all the media and information creates translucence so nothing can really surprise you.

AR: And, then, why choose painting? In the face of sculpture, installation, video, sound, and photography what aspect of a medium that could be considered traditional attracts them? And does it have anything to do with changing the stigma that painting had with the previous generation? 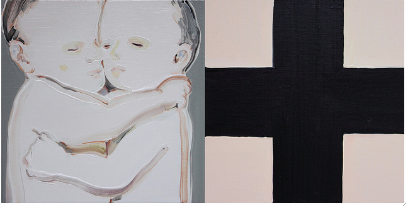 NH:  Painting is something you have to see in person. With new technology photography and video can be sent and viewed identically, they don’t change. You have to be involved with a painting – it creates a different kind of energy, painting makes stronger contact with humans.
AR: How has this generations work been received by the previous generation? Or by people their age who are not artists?

NH:  Their friends that are artists just ask about materials, how much their going to sell for, the lighting. But their friends who are not artists feel very connected to the work, and they really enjoy it.

AR: I was really interested in the title of the show, and the idea of a borderless map. Painting and the art making have always had a connection history – creating an object is a way of placing it inside history, in a sense painting has a cartographic function. Do these artists feel that they are redrawing the map for Taiwan and for our generation?

NH:  Yes, they all have this kind of ambition; energy directed towards a new map. Some of the artists want to make a new history for themselves or for their generation, but that may not be natural enough. By just working they are leaving a mark that will define a map they can’t see yet, one that half a century later will be seen.

AR: How do the artists see their work dialoguing with a western viewpoint? Are there any main differences?

NH:  Since the development of the internet that is difficult. And they feel that artists who are trying to distinguish themselves as Asian or want to bring Oriental elements into their work are being pretentious. So visually, they don’t see a big difference.