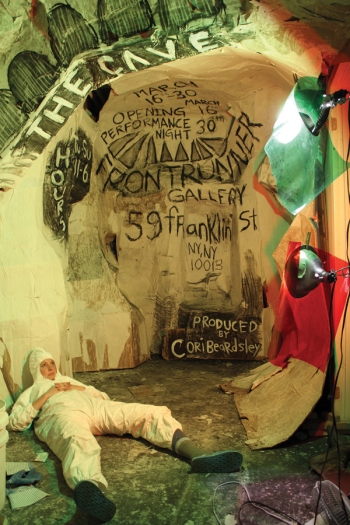 The Cave produced by Cori Beardsley

Artist Cori Beardsley, along with 20 other artists, performers and musicians have constructed The Cave in the front exhibition space of Frontrunner Gallery and in its project space, both at 59 Franklin St in TriBeca, NYC. The group show, featuring site-specific installations, paintings, drawings, soundscapes, projections, music and theater opens tomorrow evening March 16th, from 6-9 pm.

Art-Rated recently caught up with Cori to discuss the project, process and ideas behind how the project came to evolve.

Lily Koto Olive: I’d love to know more about the inspiration behind this project.

Corinne Beardsley: Working in my studio in the back of this space (Frontrunner Gallery) always felt like working in a cave, you can hear the subway passing all the time, there’s no windows or fresh air so I began to think of it as a cave, which led to the idea of having a cave drawing show and have people bring in drawings. It evolved into this thing where we build a cave. I really wanted to be working with people, and be more about that community and creating an imaginary place, to see what happened when we would all get together and create this huge thing, this environment. Initially I felt like I wanted to draw like the cave people drew, just make marks on the wall, and focus on drawing in that elemental way. It feels amazing to draw on the walls, it feels so good for some reason, I don’t know if it’s because we are connected to that part of ourselves or whatever.

LKO: How do you feel being in this environment as you build it and how does the process of constructing it around you affect you?

CB: It’s just incredible, I’ve felt like all my childhood dreams have come true; it’s everything I’ve ever wanted to do. When I was a kid I would just draw floor plans of haunted houses, but they weren’t really “haunted” they were more like sensual spaces and rooms that had different experiences that you could have…that’s essentially what this is; there’s a bomb shelter, and the crystal cavern, and then the vagina chamber that you emerge out of and there’s just all these different types of visual and physical experiences, the smells, everything. Last week after I was in here everyday I hit this point of feeling that I had to get out, it was just too much, like all cave, all the time. To create an environment and be in it, sometimes it’s hard to believe it’s here, like I can’t remember how this wall came up because you can’t visually see the evidence. There was so much help, so many people and so much time, that puts it all in perspective.

LKO: Did you have a set idea of how you wanted to construct The Cave, and how did it evolve from the process of working together with a large group of people?

CB:  I made a little maquette floor plan of how I thought the flow through the space could go, then we just started building.  I tried to encourage people to come, because not everyone built or had enough time, but I still wanted people to be around for the conversation about what they wanted to put in or what they got inspired by. A lot of people’s projects changed after they felt the space and started spending more time in it. I think that’s where the main part of the collaboration happened. Just working in here every night, the conversation and listening to music and dancing a lot created this really amazing creative energy, and that’s been the power behind it. A lot of people are bringing different things, like Jason (Jason Sho Green) has his robots, and Jessie ( Jessie Brugger) has her diorama she’s bring in, so some people have been spending a little bit of time in the space, and making stuff on their own, so it hasn’t been overwhelmingly crowded with tons of people working at once, but its been so much fun, and when I try to fantasize about what it was like for cave people to go into a space and draw or to be together and be making stuff for whatever reason it feels like that.

LKO: I know about Nic’s (Nicolas Holiber) installation of himself in the space, but what else do you expect or what are you thinking about in terms of other performances in the space?

CB: Well Patrick (Patrick Murray), Marissa (Marissa Metelica) and I, we have been creating this character The Essence who will be in the space the night of the opening, and just doing parts of her script. He wrote it, she’s acting it, and I’m making a costume and she’s kind of this character that’s been in here for thousands and thousands of years but we don’t know about time, because the audience is in the projected future finding the space that has been embalmed for however long after this post-apocalyptic time, so she has lost her memory and regained it, so her interaction with the audience is the first time she has experienced people again. Her story is this beautiful monologue, but she’s also part of The Cave and it’s part of her, so they grew together over this indefinite time they’ve become one. That’s what were trying to present, the essence of The Cave through her. So the night of the opening she will be like any other piece of art here…so that’s one performance. We also have Garrison (Garrison York ), he’s a singer/songwriter, he’s going to be performing in the back space, we’ll have different sets, he calls it “wilderness rock,” it’s really nice. Then we have Andrew (Andrew Wohlsen) and Ramona (Ramona Bradley), who will be doing something spontaneous, they were talking about doing something like Wilma and Fred, some sort of act like that. Lavinia (Lavinia Roberts) made these gargoyles that are inset in the cave walls, but she’s also making masks that she has a performance planned for…I think four percussionists will be creating a song throughout the space with handmade instruments wearing them. Then, Michael Feld (His moniker is The Messenger or The Submerged) he’s a drummer, he’s going to set up all these electronic drums, do a DJ set and do a dance party. He described it as tribal and futuristic. So then there’s going to be a big, fun dance party! Garrison also made a really nice sound scape for the space, it will always be playing in the space. He recorded in his backyard for a night, then went to the beach and recorded the sound of the water and space, and put it together, its really nice.

LKO: Would you do this kind of installation again?

CB:  Yeah, totally. I want to recreate it for sure. Maybe as a moon space next time, or explore what its like to be in the middle of the earth, just question different environments like that. But also my uncle has an abandoned house down in Maryland, its like a two-story house, he bought it, it’s on the beach. I have that to play with as far as curating another show, so sometime in the next two years I have to use it. Whether it’s making a film, or putting together a project of installations, I think that will be my next endeavour. I really love to work together with people and building and see the enthusiasm and excitement has been so much fun.

Jonathan Beer: It’s awesome that this project is letting you access parts of ourselves that are older and have been around a lot longer than our modern-day selves, more centered around behavior and community. I think that’s really exciting…you are bringing us back to someplace we’ve lost.

CB: A big thing about this project that’s so exciting for me is that I think I had spectacular experiences as a child going to haunted houses, one was in an old long chicken house, that’s one my friends put together, they just made these spaces in houses where they just completely transformed the houses, and those kinds of experiences where you can go into a space and compeltely transform it..this space is made out of trash, all we really had to pay for was screws, tape and flour, that makes me excited. And with the lights off, it’s really special in here, using the torches that we made, it’s gonna be really cool. What I’m roundabout trying to say is that thinking about my friends and why I like to make stuff, this cardboard is like drawing…you can take a knife, and bend it, and screw it in, and you can bang out these forms so fast.

CB: Yeah for me I didn’t realize the material was like that..I definitely think I’m going to work just in cardboard for a while. It’s so beautiful with just the cardboard with the screws inside of it and the architecture. I’m always frustrated with the art world, and when I felt like that I’d go to drawing, it was the most important to me..that mind, hand, eye coordination, that’s true expression, to be in that peacefulness when you’re drawing. I also think a lot about cave drawings and why did they go in there and why are we making this stuff, if it’s not just for ego and show, what is it really for? I really wanted to create a space to do that in, so I guess we will be doing that in the next few days. There’s been so much playfulness, making a big space out of refrigerator boxes, it’s been wonderful. I would love to do more in a larger space that can stay open.

CB:  Yeah, as we’ve been working we’ve been talking about getting a studio together and having a communal cave area that we can work in and also have our little dens, because as we’re working everyone has had a station, and then we come into the center to cut cardboard then we come back…that feels so organic just being surrounded by these white stiff walls, it feels really good.

JB:  I think its our oldest way of having a studio practice.

CB:  A lot of it I thought about conceptually before the project, but then you feel like you’re rushing, like riding this wave, almost like body surfing and you don’t even realize that you were body surfing.

JB:  Maybe Bauhaus would have worked if they had a cave….

CB:  It’s also been really neat how everyone interprets what they would want to bring into a cave, a lot of it is about differential experiences and it does feel in the air really claustrophobic, you kind of want to get out, but you also want to stay in the spaces, I didn’t expect that…you feel safe, but when you’re alone and when there are others the sounds are really different.